THE HUNTSVILLE DOPPLER: READ LOCAL
BY: DOUGLAS MCLEAN ON FEBRUARY 1, 2020 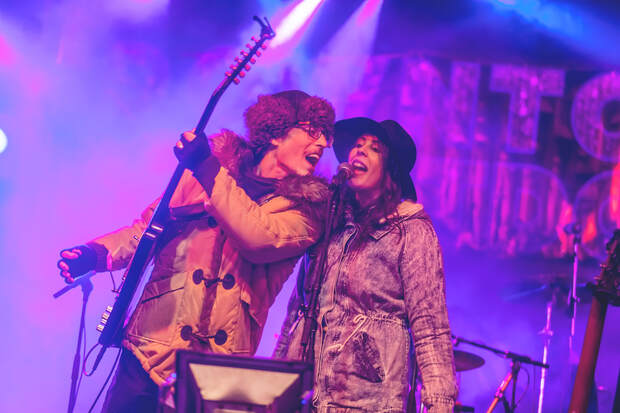 ​Nicole Duquette: For the love of song“I wish that you knew , just what I want to tell you…” sings Nicole Duquette in the opening phrases of The Hillbirds’ new single, “Peace of Mind”.
The song, the band, and the recording work in progress all spring energized and anew from Nicole’s love of song, music and melody.
“O my head spin round and round … My feet won’t touch the ground.” These lyrics are meant to carry you into the exciting world of a young musician finding her footing within the fast-tumbled world and work of the Canadian music industry. Nicole’s voice is one that will undoubtedly be heard for many years to come.
Nicole’s love of music began in her early teens growing up in Huntsville. She discovered guitar as her instrument of choice when given help from her uncle. She discovered her gift for song when moved by the challenges her father faced dealing with chronic illness.
Wanting not only to share her feelings and emotion, she chose to—and was moved to—see that all circumstances must be met not only with resolve and resourcefulness, but with hope, love and determination; to rise up and rise above.
Her early songwriting formed the abiding recognition that song and art, in all its many forms, are transformative—taking what is observed, heard and seen and finding the inner sound, the melodic means, to connect with others and lift them up.
Like all young musicians growing up in a small town, Nicole dreamt of finding a way to bring her songs into the world. But life is a practical affair, and she pursued her education and vocational goals at Canadore College in North Bay. While working toward her diploma in Early Childhood Education, she met Nick Duquette, a remarkable guitarist, trumpet player and songwriter, who encouraged Nicole to pursue her music. Their musical partnership soon became marriage and Nicole found a collaborator and a soul mate.
In 2017, Nicole was offered a position as a nanny for a family who lived in Annecy, France, where she and Nick lived, worked and taught. Moreover, they found that they could play music together there in the many wine bars and cafés. To their surprise and delight, the Duquettes were able to explore their burgeoning sound, even though they mostly played covers of other artists’ songs. Nicole believes it was in this beautiful countryside and environment that they, and she in particular, found a deep passion for music. They realized there and then that they must pursue a professional career in music.

Returning to Canada in 2018, Nicole and Nick formed a plan for how they would undertake the inspirational goal of ultimately playing songs for a living. In the year that followed, while working at their respective trades, they formed a band called The Hillbirds.
The Hillbirds’ sound is as unique and elevating as their name suggests. Nicole feels they found a congenial alliance with fellow instrumentalists, drummer Tanner Greatrix and bass player David Rakusin. Both bring styling that match well with the talents that Nicole’s singing and songwriting bring to the mix, and they blend well with the multi- skilled Nick who adds lead guitar and trumpet to their songs.
Their material, at this point, tends toward joyful, cheerful, alternative folk pop rock which admirably supports Nicole’s beautiful singing and phrasing. The presence of solo trumpet in a pop band is both an electrifying and a defining aspect of the music this band will be making.
The Hillbirds released their first single “Peace of Mind” in December 2019 and they are encouraged by the reception thus far. Nick’s nimble guitar introduces the song in which Nicole sings her thoughtful lyrics while the band falls in behind. The song is immediately recognizable, fusing textures and colours that have permeated radio songwriting throughout its history. Still, the song is unique enough to stand on its own and merit continued interested and listening.

​“Peace of Mind” is the first tune available from their forthcoming EP album which The Hillbirds hope to have available for national distribution by the summer 2020. The album will mostly be engineered and produced by Nick in their own studio with outside help coming from associates in Barrie, Ontario, where the band makes its home. Based on the accessible sound of their first single, it is likely they will be a travelling touring band in the near future as their audience grows and more fans find their way to their music.
On stage, The Hillbirds are a pleasure to watch and hear. The interplay between band members and especially between Nicole and Nick is appealing and one senses that audiences of all ages could easily gravitate to their songs and live shows.

Nicole has a large catalogue of her own songs but she and Nick are writing a fair number of new songs together. While they have their own approach to the process of song creation and arrangement, they both try to stay open to inspiration and ideas from all sources. Nicole firmly believes that songs must connect with the listener and fulfill needs that we all have such as the need for love, hope and joy.
Nicole also finds that life is best pursued by finding your passion, reaching for goals, striving for what you believe in, and doing what you love. Love is the essential component of Nicole and The Hillbirds’ magic—love for yourself, love for each other and love for what you get to do every day. Love of music is a joyful dance we get to do together. Let Nicole Duquette show you how!

The Hillbirds won the local time slot to play Barrie’s Downtown Countdown on New Year’s Eve. The four-piece alternative pop rock band edged out more than 30 other groups for the time slot which see them taking the stage in-between the children’s act Splash ‘n Boots and headliner, The Trews.

On their way to making their first album, the Hillbirds dropped their first single Peace of Mind earlier this month. Written by lead singer Nicole Duquette and David Rakusin, the band’s bass player, the song explores the feelings and emotions experienced after breaking up with an ex-lover.


The Hillbirds started out as a husband and wife musical duo, Nicole and Nick Duquette, who mixed the single, and they have since expanded to a four-piece with the addition of Tanner Greatrix on drums.

“We realized we wanted to do music while living in France,” said Nicole, who landed a job as an au pair (nanny) and Nick went to work teaching music to kids. “We played lots of music in little wine bars and small restaurants and realized it was a huge passion. We really enjoyed it.”

The couple met at North Bay’s Canadore College where she was studying early childhood education and he was in avionics. After college, they moved Brantford for work and bought their first house. But she had always wanted to go to France and when the opportunity came up to work there, they sold their belonging, rented out their home and left the country.

“Everyone thought we were crazy,” she recalled.


They returned to Canada in July 2018 and settled in Barrie, the half-way point between his family in Chatham and hers in Huntsville. Both were hoping to build the band here. They found Rakusin last August on Kijiji and Greatrix earlier this year after Nicole met his parents while doing live music classes at Modo Yoga.

Nicole’s interest in music began at the age of four or five. Her uncle, who played acoustic guitar, showed her a few notes and taught her to play her first song, Smoke on the Water. She fell in love with the instrument and started teaching herself how to play it. She also took all the music programs she could in school from vocals to jazz and played the alto sax and clarinet in an instrumental band.

By age 13 she purchased her first guitar, a second hand one, from money raised bussing tables at a restaurant where she also marked her first performance at a Christmas party. Her first public performance was in front of hundreds of people during a Midnight Madness event in Huntsville.